We did it! Around here, we’re pretty excited about this one: Our first “Fummins” build.

We named the project “Tom.”  That’s for two reasons:

First, we bought the truck from a stylish guy named … you guessed it … Tom.  He drove the truck out to us in the Pacific NW all the way from Maryland.  Thanks Tom!

And the second reason is this: The school bus that gave up its engine was a Thomas Built Bus (#425 for those keeping track of how to get home after school) which was bought at a GOV deals auction from a local school district.  Bus #425 had approximately 9000K hours and 156K miles.

Back to the original truck, it was in surprisingly good condition, considering that the Superduty had north of 300K on the clock and spent its days in a rust-prone part of the USA.  It even made that cross-country drive without issue, other than the expected dirt and wear and tear.  The truck ticked all the boxes needed for my first Fummins swap: Basically that it was a running, driving truck.

The goal for this build was straight forward: Create a “forever” truck.  We decided to tackle this in two phases:

Because I know everyone wants to see photos, I tried to document the build with the details that would be most interesting and helpful.  Here we go:

We started by dismantling Bus #425 and removing the engine.  For any of you considering this, let me just say, it’s a major undertaking requiring a lot of work and equipment.  I would never attempt to remove the engine without the use of a suitable forklift or a very big tractor with a loader.  Everything on the school bus is big and heavy.

I had excellent help courtesy of a sawsall and a good pack of blades:

While in process, make sure you keep track of the required wires as well as the gauges and the gas pedal.  You’re going to need to keep those.  Also, if you intend to reuse the bus air system, make sure to keep the governor as well as the dryer and some of the air tanks.  We also kept all of the battery cables, fuse holders, and switches.  There are a ton of good parts on the bus that we tried to keep for future use.

We finally had both the engine out and the parts we wanted to keep.  It was time to send the rest of the bus to the recycler.  We were glad that part of the project was over.  Working on gravel sucks!!!!

Once we had the engine in the shop, on a workbench, we could really see what we had.  Have I mentioned working gravel is the worst?  I was so glad to be back in the shop.

In the shop, we first added the SN of the Cummins to Quickserve and unlocked a lot of very useful information, everything from wiring diagrams, service manuals as well as air system diagrams.  If you have not set up a quickserve account for your Cummins, I highly recommend you do so.

Our engine is rated at approximately 250 HP, so our plan for 350hp is doable with a set of 100hp injectors and no tuning.  We sent the injectors out to our local turbo and injector shop for them to be resized.   It appears that our VP44 pump, as well as the lift pump, were recently replaced.  Great news for us!  One great thing about buying a bus from a big school district is that you can be confident the buses were maintained.  As a bonus, the buses aren’t necessarily going to auction because there’s something wrong with them; we learned from the helpful shop manager at the bus depot that most of the auction buses are just old.  They just need to make room for new ones.

Our turbo is an HX35W and was in great shape.  As a result, our plan is to run it and if the black smoke is bad with the upgraded 100HP injectors, we will swap it with something bigger.

Here you can see the two ECM connectors.  Thanks to Quickserve, we have a great wiring diagram for the ECM connector as well as the 23 pin connector that is used for all the power, ground, and switched power connections.    Because the School bus engine is modular, the wiring is simpler than it looks.  In most cases the harness comes apart in big sections with bulkhead connectors as well as a lot of weather pak connections.

We pulled the cylinder head and were very happy with what we found.  No ridge, no discoloration and still a clear appearance of the crosshatch pattern on the cylinder walls.

We cleaned up the surface of the cylinder head and inspected all the valves. Finally, we cleaned up the block and got everything ready for new gaskets and head studs.  The condition of the engine internals gave me a lot of confidence that this engine has a lot of life left and does not need a rebuild or machining at this time.

Now it was time for ARP head studs and new gaskets.

After everything was torqued up, we sprayed Cummins Beige and topped the engine off with a “Fummins” Valve cover from my friend at Quick Draw.

Now that the engine is ready for install it was time to shift focus to the chassis and get it restored and ready for the fresh 24 Valve. We started by removing the bed and getting the rear chassis restored. You will also notice we bought new wheels and tires for Tom.  I could not stand the old crusty wheels it had and the new wheels fit perfectly with the overall theme of the build colors.

After we pulled the bed it was time to clean the chassis and address the rust.  Thankfully the rust was limited to surface rust so no significant repair was needed. 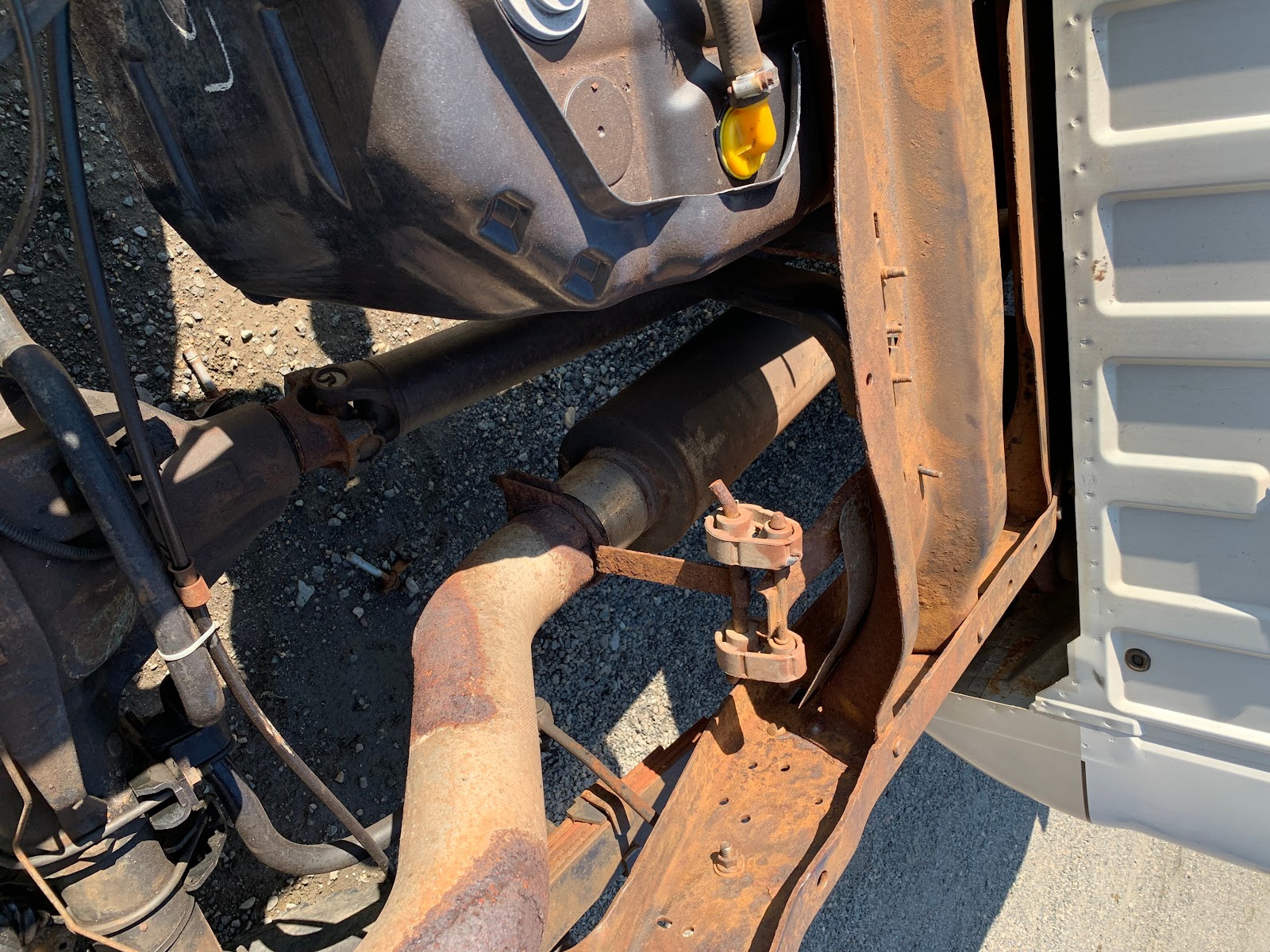 After a lot of work and wire wheels, plus some heavy pressure washing, we brushed on rust convertor and then topped it off with SEMS Rust shield in every possible crack and seam.  We were very happy with the results.

Now that the rear chassis section was restored, it was time to immobilize the truck and pull the cab and the old, tired 7.3L Powerstroke.  This turned out to be difficult as almost every mount needed to be torched off.  A new poly mount kit from Daystar is on the order list.

After the engine was removed, we moved the chassis so that it could be cleaned, degreased, rust scraped off, wire wheeled and painted with the SEMs rust shield just like the back half of the chassis.

Fast forward, after a ton of work, we have an amazing looking chassis that has all the rust converted stopped and will last for many years to come.

Now that the chassis was restored and ready for the Cummins, it was time to mock up everything and build some mounts.  We moved the chassis back over to the lift so that we can test fit the engine positions and build out mounts.

To get the Cummins mounted into the Superduty chassis, we used two 2010 Right hand Ram Truck Cummins engine mounts. These mounts are Anchor Part number 3410. Then I measured and cut out some plates on the CNC plasma and test fit everything over and over to make sure I had all the clearance we needed.  (By the way, if you’re interested in these engine mounts, they’ll be available soon on our website: https://adventurevehiclesnw.com/).

The transmission was moved back approximately 2 inches; this allowed use of a mechanical Gen 2 Dodge fan.  We also cut out some of the front crossmember so that the high capacity oil pan from the bus could be used.  More on engine placement later in the post.

Now that we have the engine mounts fabricated and all the clearances verified, it was time to blow the whole thing apart fishs weld everything and turn the corner and finally start assembling the chassis for good.  Before we could do that, we needed to box the front crossmember we cut to have clearance for the large oil pan.  This wouldn’t have been necessary if we had used an oil pan from a Dodge truck, but since more oil is better and the Ford crossmember had a huge hole in it to begin with, we decided to cut it out and box it in.

Then we had to touch up the paint.

While the chassis was empty we replaced all the brake lines with a SS set from Dorman. We also mocked up all the air system parts, rear power cables, as well as new Billstein shocks.

As for mating the Cummins to the ZF6 6 speed transmission, we used the steel adapter plate from Wildhorse MFG as well as a crank spacer and a conversion clutch kit from South Bend. Lastly, we clearanced the block as well as the bellhousing on the transmission  to allow the use of the Ford 6.4L Diesel Starter.

After a ton of work we were finally ready to set the engine and transmission back into the chassis and get our custom engine mounts bolted up.

Here are some better photos of the engine mounts we will be selling on our website.  If this were a 12 valve, we would have needed offset adapters.  This is because the 12 valve does not have the second set of mounting bolt holes in the block.

It was finally time to move the chassis back to the main shop where the Cab was patiently waiting.

Finally we were ready to set the body back on the chassis.  Before we did that, though, we shot a walk-around video you can watch over on our Youtube channel here.